Two years ago, Alpine introduced the largest aftermarket AVN system available in North America, the INE-Z928HD. The matching Perfect F.I.T. (Factory Integration Technology) dash kit solutions offered professional, factory-finish dash trims to complement the 8-inch monitor. This year, the company is introducing the X008U, which is the second generation of the 8-inch AVN system. The X008U is compatible with the existing Perfect F.I.T. dash kits plus new truck and SUV dash kits being introduced this year. 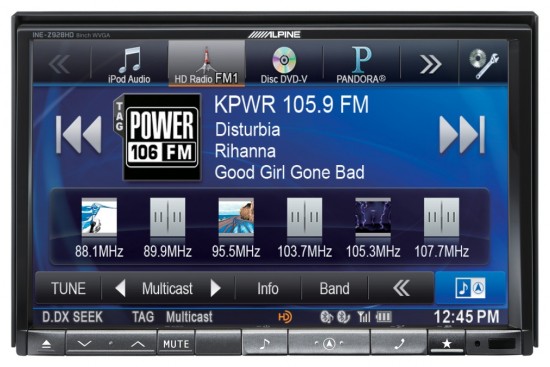 “Alpine’s 8-inch AVN system and Perfect F.I.T. solutions truly changed the industry. We delivered a large screen format to consumers who were unable to get one as a factory option,” said Steve Crawford, vice president and general manager, aftermarket business unit, Alpine “The X008U continues this premium experience by delivering a screen size that is well-suited for large vehicles. When the X008U is used especially with the new truck and SUV dash kits, these drivers will get a truly integrated solution that fully matches their vehicle.”

The X008U joins a robust lineup of AVN systems available in various screen sizes. The truly unique X009-GM is a new 9-inch AVN system designed for GM trucks and SUVs. Alpine also introduces the INE-W957HD, which has all the same features as the X008U but with a 7-inch screen. Rounding out the lineup is the INE-W940 with a 6.1-inch screen, which is currently available.

Perfect F.I.T. dash kit solutions provide the X008U’s 8-inch screen with a seamless fit into the vehicle’s dash. Eighteen dash kits are currently available and four new kits for truck and SUV models will arrive in 2014. Each kit is designed to cosmetically match the shape, color and texture of the vehicle’s interior. The Perfect F.I.T. kits come with all necessary accessories for the plug-and-play installation of the X008U including an Alpine/vehicle-specific harness, antenna adapter (if necessary), Alpine-specific steering wheel interface, and BUS adapter (if necessary).

The X008U and INE-W957HD retains many of the factory vehicle controls through the iDatalink Maestro module (sold separately). Users can choose customized vehicle information (diagnostic data, gauge screen, parking assist screen, etc.) to be viewed on the screen. Examples of factory features that can be retained through the X008U and INE-W957HD include: OnStar from GM, SYNC from Ford, factory amplified system, rear seat entertainment system, rear view camera, SiriusXM, and steering wheel controls (retained features and customized vehicle information vary by vehicle model).

The X008U and INE-W957HD are compatible with Alpine’s exclusive TuneIt 2.0 smartphone app. TuneIt debuted in 2013 and is an easy-to-use sound tuning app which offers Facebook notifications. Users download the free app onto their iPhone or Android smartphone and create a user profile with information about themselves, their vehicle, and their Alpine sound system. They can follow the simple instructions to adjust sound settings (like Time Correction, Parametric EQ and Crossover) for their specific vehicle, or choose from the pre-made settings in the database. Users can share settings and rate settings made by others. The sound setting activities are done through a graphical user interface on the smartphone. The phone only needs to be connected when downloading the sound setting into the AVN system; this connection can be done through USB for iPhone or through Bluetooth wireless technology with a compatible Android smartphone.

Users are notified of incoming activity on their Facebook wall through a pop-up message on the X009 screen, showing the name and photo of the sender. If the user chooses to accept the notification, TuneIt 2.0 will play the message back via text-to-speech and the user can “Like” the message through the press of a button. When the vehicle is parked, the user can view posted photos and messages or play back messages via text-to-speech.

The new AVN systems each have a full WVGA high-resolution screen for crisp, detailed picture quality. They have Independent Dual Zone, which lets drivers use a source in the dash while the back seat passengers enjoy a separate video on the rear seat screen (optional screen sold separately). Both the X008U and INE-W957HD have MHL compatible HDMI inputs, allowing for flexible connectivity to a wide variety of mobile devices.

Both AVN systems have the popular “My Favorites” feature, which lets users customize quick-access screens with up to eighty shortcuts to their most-used features. Two separate users can each design as many as ten Favorites page profiles of eight shortcuts per page, Shortcuts can be created from audio sources, navigation commands (favorite places direct search, nearest Point of Interest [POI] search), and phone settings (favorite person direct call). The shortcuts are easily added by pressing the shortcut soft key that appears within all audio and hands-free sources. The Alpine system recognizes each user’s profile (via Bluetooth wireless technology from his or her smartphone) and automatically loads the user’s system preferences when he or she enters the vehicle.

The 2014 Alpine AVN systems and Perfect F.I.T. dash kit solutions will be available at authorized Alpine retailers, visit www.alpine-usa.com for a store locator.

The following dash kits will be introduced in 2014, pricing and availability TBA: