Today’s consumers expect to integrate their favorite digital sources into their vehicle’s system. As a new solution for these consumers, Alpine today introduced the iXA-W407. The iXA-W407 is Alpine’s newest 2-DIN Digital Media Station, with optimized iPod®/iPhone® playback, large 7-inch touch screen and built-in Bluetooth™ powered by Parrot. Now shipping, the iXA-W407 is also available as a complete Audio/Video/Navigation (AVN) package for $1,100, which includes the NVE-M300 GPS Navigation Drive. (See pricing and availability below for more details.) 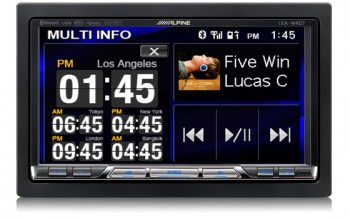 The iXA-W407 receiver has an AM/FM tuner and a high-speed USB input for optimal iPod/iPhone connection and pure digital sound from the iPod. Users also can connect USB memory devices and MTP-based MP3 players via the USB input. Any iPod with a 30-PIN dock connector is compatible with the iXA-W407. The unit meets the specifications for the “Made for iPod” and “Works with iPhone” compatibility.

“The iXA-W407 addresses consumers’ demand for a high-performance in-dash system that provides complete support for today’s digital essentials, such as iPod playback and Bluetooth functionality,”

The iXA-W407’s navigation functions are provided by the Alpine NVE-M300 GPS Navigation Drive. The NVE-M300 is a compact external drive that is installed in a hide-away location, such as behind the dash. Its OnPoint™ Advanced GPS Positioning simultaneously uses three technologies – satellite-linked GPS data, solid-state gyro sensor technology (to determine the vehicle’s direction) and accelerometer technology (to gauge the vehicle’s speed) – for accurate navigation. Voice-guided directions are played through the car’s sound system, while driving maps and maneuvers are displayed on the iXA-W407’s 7-inch screen.

Additional features of the NVE-M300 include:

Built-in Bluetooth The iXA-W407 is the first Alpine source unit to have built-in Bluetooth powered by Parrot. This convenient feature provides users with seamless hands-free phone operation, extensive phone compatibility and optimal sound quality played through the vehicle’s sound system. Users can view their phone book and full call information on the iXA-W407’s display, including Caller ID, Missed Calls, Dialed Calls and Received Calls. Audio files stored on a Bluetooth wireless technology-enabled cellular or portable device that supports audio streaming can also be streamed to and controlled from the head unit. Future software to support new phone models and other upgrades can be downloaded and installed via a PC and the wireless Bluetooth connection.

In addition to navigation and Bluetooth, the iXA-W407 can readily connect to and control a variety of digital media sources. The iXA-W407 features three pairs of 2V pre-outs and a built-in 18W RMS x 4 amplifier (at CEA-2006 Power Ratings) for system-building flexibility. Options such as satellite radio and HD Radio with iTunes® Tagging, as well as a rear-seat entertainment system and/or DVD changer, can all be easily controlled via the iXA-W407’s large monitor and intuitive slide-and-touch user interface. (Separate products and subscriptions required.) Also available is the HCE-C107D Direct Connect Rear View Camera ($220 SRI, sold separately), which can display what is behind the vehicle onto the iXA-W407’s screen.

Consumers who purchase the iXA-W407 with the NVE-M300 navigation module can take advantage of a special package price of $1,100 for both products. This offer is available at participating authorized Alpine retailers in the U.S.; consumers should contact their local Alpine retailer for details and availability.