“We know that consumers have been waiting for this AVN system,” said Steve Crawford, vice president and general manager, aftermarket business unit, Alpine “We’re excited to launch this product which introduces some new and unique features to the AVN market.” 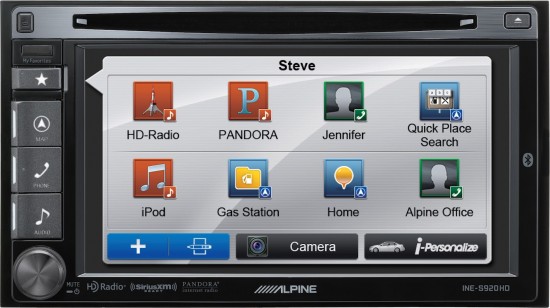 The INE-S920HD has a full slate of audio sources including:

An enhanced navigation platform debuts on the INE-S920HD and includes a 3D view that depicts major landmarks, buildings, and terrain details in main metropolitan areas in 3D. The Auto Zoom feature delivers proximity zooming as the next driving maneuver is approached. The Highway Services list displays the services available at each exit (gas, food, ATMs, etc.), to help users make decisions during their routes. Also new is the Freeform Search function, which allows users to type in the first few letters of the destination using the formal name (ex: Alpine) or the category name (ex: Electronics company).

The “My Favorites” screen lets users add, delete, drag and re-arrange up to eight shortcut keys for their most-used features, such as Audio Sources, Phone Settings, and Navigation Commands. The settings are kept as a personal profile linked to the user’s phone via Bluetooth® wireless technology, so that the shortcuts can be accessed on the INE-S920HD.

The INE-S920HD is available now for $999.95 MAP at authorized Alpine retailers.