Alpine today announced that the company is shipping its new INA-W900 All-in-One Audio/Video/Navigation Receiver. Large icons, direct source buttons and a simplified intuitive interface allow drivers to easily manage navigation functions and control all of their digital sources and driver-assist products when on the move.

The INA-W900 AM/FM/CD/DVD receiver has a built-in proprietary navigation system, including pre-loaded maps of the U.S. and Canada with more than 6 million Points of Interest (POIs) and voice-guided turn-by-turn driving instruction. The system also uses Alpine’s innovative OnPoint™ Advanced GPS Positioning to deliver a superior navigation experience. OnPoint ensures that the vehicle stays accurately positioned on the map, even in areas where it’s difficult to receive GPS reception, such as in a tunnel or around tall buildings. OnPoint simultaneously uses three technologies to deliver advanced performance: satellite-linked GPS data, solid-state gyro sensor technology (to determine the vehicle’s direction) and accelerometer technology (to gauge the vehicle’s speed). 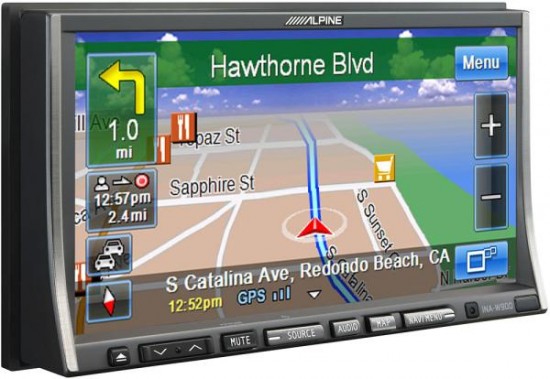 The unit boasts a 7-inch WVGA touch screen with 1.15 million-pixel technology that allows for greater clarity and enhanced image quality. Various screen display styles and a choice of four menu colors allow the INA-W900 to coordinate with the vehicle’s interior. The screen size allows for large buttons and the new GuideView Window™ display. The GuideView Window shows the next navigation maneuver within the audio screen, so users do not need to switch back and forth between the navigation screen and other sources. This allows drivers to have a visual prompt of their next maneuver regardless of the function they are using. Hardware features include four buttons on the INA-W900’s outer frame to give users quick access to the most-used functions, which are Source, Audio, Map and NaviMenu.

“The INA-W900 AVN system offers an easy-to-use interface making it an appealing and versatile source unit for everyone from families looking for a great navigation/entertainment system, to audiophiles looking for a source unit to build on for a dynamic sound system,” said Mike Anderson, assistant vice president, sales and marketing, Alpine Electronics.

In addition to providing fast, accurate navigation, the INA-W900 offers a full slate of built-in and expandable features so users can create a custom system that meets their needs. The INA-W900 meets the specifications for the “Made for iPod®” and “Works with iPhone™” compatibility. The USB port makes it possible to integrate an iPod®, iPhone® or a thumb drive for users to listen to all of their favorite digital music on the road.

“The INA-W900 AVN system offers an easy-to-use interface making it an appealing and versatile source unit for everyone from families looking for a great navigation/entertainment system, to audiophiles looking for a source unit to build on for a dynamic sound system,”

Users have iPod or iPhone music access and control from the INA-W900’s touch screen. Artist, song, album name and album art information that is displayed on the iPod or iPhone also is displayed on the INA-W900. The Percentage Search function takes the iPod or iPhone music library and applies it along a vertical touch bar. Using a tap or sliding motion along the bar will jump to a song in that section of the music library for quick and easy file navigation. Songs also can be searched alphabetically using the Alphabet Search function bar that is placed horizontally on the bottom of the screen.

The unit also offers the flexibility to add Sirius XM satellite radio and/or HD Radio™ (separate tuners and subscriptions required). Users may take advantage of iTunes® Tagging functionality when used with the Alpine TUA-T550HD HD Radio Tuner. When users hear a song they like on an HD Radio station that is broadcasting metadata, they can “Tag” the song by pressing the “Tag” soft key button on the touch screen. Information about these Tagged songs is transferred to the iPod. When the iPod is connected to the computer, iTunes automatically presents the songs in a new Tagged playlist so the user has the option to preview, buy and download the songs from iTunes, if desired.

For driving assistance, the INA-W900 also can be used with a choice of camera systems. The Alpine HCE-C107D rear-view camera plugs directly into the unit without the need for a separate black box. Other camera options include the HCE-C200R rear-view camera and HCE-C200F front-view add-on camera, which offer multiple angles of either the rear or front of the vehicle. These cameras are activated by pressing the camera button on the source menu screen of the INA-W900 or when the vehicle is put into reverse (for the rear-view cameras). A camera input adapter is included with the INA-W900, but the camera systems are sold separately.

Bluetooth® wireless technology also can be easily integrated through the audio system with the Alpine KCE-400BT Bluetooth Wireless Technology Interface Module. The KCE-400BT is powered by Parrot and lets consumers conduct hands-free phone conversations that are played through the vehicle’s sound system, making it much more convenient to make calls while behind the wheel.

The INA-W900 is now available at authorized Alpine retailers for $1,100 SRI.